At the Window of My Life

My Grandmother, Fruma Rivele Bremeg
(“Bremeg” is an acronym for “Descendent of Rabbeinu Moreinu Gershom,” a great eleventh century rabbi)
My grandmother was a simple Jewish woman
Who could neither read nor write—
And, what is more,
She could not sign her name.
She was born and brought up in a village inn
In a far-flung backwater, “not far from Uman.”
Her father, a religious and pious Jew,
Sat in the tavern and learned Torah,
Sold glasses of vodka to Ivan and Stefan,
Served God sincerely and faithfully.
Her mother, loving, a homemaker,
Always worked hard, lived in poverty,
A wife receives a portion of the world-to-come from her husband’s learning—
This her mother certainly believed.
Their only daughter, a pious soul—
Like her name, Fruma (“pious”) Rivele—
Did what good and pious people told her.
She knew all of the blessings by heart.
Her parents never thought of teaching their daughter.
For a Jewish woman, learning is not appropriate—
She need only know her three mitzvos,
Be a mother to her child and faithful to her husband.
My grandmother grew up as free as a bird,
Not far from the brook in the nearby woods.
She sang Ukrainian songs of longing
About a wicked mother-in-law and a white cow.
She climbed on trees with ripe fruits,
Washed the laundry by the crystal brook.
She befriended the gentile village girls
On plowed, broad fields.
At the age of fourteen, she was married
To a husband from Mohilev near Dniester,
An orphan boy from a wonderful family,
The best student in his class.
The family rejoiced with their fine son-in-law,
Promised him—as is proper—to support him forever.
My grandmother bore children and lost children.
With every newly-born child, she consoled herself.
Years passed, years flew by,
My grandfather became a grain merchant,
His name was renowned in distant districts,
He shipped wheat and rye on the Dniester.
He moved to the great town of Mohilev,
He headed a fine and beautiful empire.
Besides her own children, she always cared for widows and orphans,
She gave them dowries and married them off.
She always supported poor people,
She became a friend to the lonely.
She helped everyone with a good word, with advice.
She gave charity with an open hand.
She never took time for herself:
“A person must rely on God’s help and care.”
“Pious Rivele”—that was what they called her—
Became the best-known mother in town.
She went to the synagogue with awe and dignity,
She listened to Chayah-Leah, who read the prayers aloud.
She wept over the painful fate of the Jews
And soaked her book of prayers with her bitter weeping.
Before she passed away, she allowed the rabbi to be called.
Her sons and daughters stood at her bed,
Bent over to hear the sick woman,
Who, with her final strength, spoke words of Torah to them:
“If you have enough for the Sabbath, do not forget someone else!
Give half of your challah to the poor.
God, blessed be He, has given you money.
You are only the agent, like the summer swallow …
“If you make a new garment for your body,
First give a garment to your soul:
Support the lonely, poor person.
Always sand up to do someone else a favor.
“Cast your bread upon the current of water.
When you help someone else, you will find your own happiness.
You never can know when
The current might run the other way…
“Do not fight with each other—that is my request.
It is not fitting for Jews, for religious people.
I beg you to distribute my entire inheritance,
My clothes and jewelry, to the poor.”
Ending her words, calm, at peace,
She recited Confession with her hands clean,
Closed her eyes with a glowing smile.
Her soul left for another world…
Everyone remained frozen, unmoving.
Everyone lamented and wept silently to himself.
An angel fluttered its wings
And took my grandmother to heaven with him.
When she passed away, my mother told me,
All the stores in Mohilev were closed.
The school children walked before the coffin,
The leading citizens brought her to be buried.
Women wept and cried out loud.
They tore their hair and argued before God:
“Why have You shamed us, Master of the world,
And taken away our provider?”
My grandmother was a simple woman
Who could neither read nor write…
Most of the stories about my grandmother I heard later on in America from my mother’s lips.
But I myself remember very well how we grandchildren—eight or nine of us—would often dance around the large, round table in her house. Grandfather, who was an excitable Jew, couldn’t the tumult and noise and stuffed his ears. But Grandmother stood with her hands on her hips and took delight in us.
I remember, as in a dream, how Grandmother raised a brother’s orphaned son, Avraham Bremeg. Later, when he decided to travel to America, Grandmother collected money from all of her children and supplied him with provisions and expenses.
When one of the daughters balked at giving, Grandmother told her: “My daughter, you never know what might happen. It is possible that one day you yourself or one of your children will have to go to him for help.” And that was indeed what happened. Years later that same Avraham Bremeg sent ship tickets to his Uncle Tuviah and his older son, and then to Aunt Frieda and her children.
Posted by Yaacov David Shulman at 4:07 PM 4 comments: 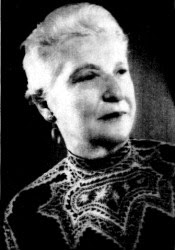 Aliza Greenblatt was a famous Yiddish poet and troubadour in 1930's America.
In 1960's and 1970's America, she was a sweet old woman who always had a smile and a small gift for me.
I knew her as a boy because we both lived in Sea Gate, Brooklyn, which at the time was the home of a number of Yiddishists, including my father, who was a humorist and writer for the Forward.
In 1966, she published this memoir, entitled "At the Window of My Life," which I just discovered recently. Here are the first two short chapters of that memoir, which include a few of her poems.
If you would like to see more of her memoir translated into English, please get in touch with me, Yaacov David Shulman, at yacovdavid@gmail.com.
Thank you, and enjoy!

See the Book in Yiddish

A Word about the Translator

Hi, my name is Yaacov David Shulman, and I've written, translated and edited more than thirty books, including Memoirs of a Yiddish Actress. You can learn more and read excerpts at shulman-writer.com.